Built in 1901 to commemorate Yale’s bicentennial, Woolsey Hall, still today, is considered the main auditorium on the Yale campus and its primary performance venue.  It is used throughout the school year by both The Yale Symphony and The Yale Philharmonic, and it is used for official occasions including installations of new Yale Presidents.  Woolsey was, in fact, named for Theodore Dwight Woolsey who served as President in the mid 19th century.

Yale grad and former American President William Howard Taft has the distinction of being the largest President in the history of the US.  A frequent patron of Woolsey Hall, he was provided his own extra wide seat, which still stands (sits?) in the balcony.

Woolsey Hall is also the main venue for the New Haven Symphony,  and last night the orchestra played to a packed house in a performance of Beethoven’s Ninth with a set of marvelous soloists and the Yale Glee Club. However, the time it took for the audience to settle seemed to take longer than the show itself.

Finding your seat at Woolsey Hall is a challenge. Ushers were there;  wearing badges, and holding programs, and looking like they were ready to help people. But they were doing so under the handicap of being completely clueless as to how the hall is set up.

On the second level, one usher stood there checking people’s tickets and saying , “You are in a row on this level,  but I don’t know which side. Anyway, did you want a program?”

When my friend Barbara and I went inside, we were struck by how many seat numbers are no longer readable. Many people set their phones to “flashlight” in hopes of finding anything that looked like a number. Once we realized that our seats were on the other side of the row and we needed to go through the OTHER doors to get there, we felt obliged to help all others who simply could neither find their seats nor find someone to help them find their seats. Bear in mind that this auditorium seats 2,650!

I realize that part of the charm of Woolsey is its wooden seats which are slightly more comfortable than the bleachers at the Yale Bowl (except, probably, for Taft’s chair)  Sadly, the seats do little to help the muddled sound that sometimes occurs because of excessive echo problems. And even though the staircase aisles in the balcony are without banisters, the look offers an old world charm.  Of course, it also renders octogenarians and older folk apoplectic in their fear of falling, but still, you know, charming. And although, one would hope that once people have finished the obligatory standing ovation (that is a New Haven thing. They stand for everything, but I digress) , management might have the courtesy to put on the house lights so people don’t miss a step and take out a hip while exiting.  The hall remained dark for several minutes as we all groped through the dark hanging on to each other before they switched them on.

As a person who has sung in the hall, I can tell you that the backstage area does not offer much in the way of comfort, but you tend to show up all dressed and ready to perform, which is good, because the ONE mirror in the backstage area is often rather crowded.

I still love Woolsey Hall.  I have loved it since my first concert there which was Janis Joplin (my second was Jimi Hendrix.)    But would it be too much to ask that there be some modernization done to improve the performance experience for both the patrons and the artists? Andrew Carnegie built Carnegie Hall ten years before Woolsey was built, but when I sang there with a Yale group in 2015, I found it to be extraordinarily comfortable and modern and classic all at the same time.  The risers we sang on were wide enough to accommodate chairs so the singers could sit when they were not singing.  I sang three concerts in Woolsey last year, and did so on risers that must be fifty years old, and offer absolutely NO space to move, so forget about sitting down.

The last paragraph of the Wikipedia article about Woolsey Hall says,

I did see signs last night that they are renovating the old dining hall, which is a beautiful space and serves as a venue for Jazz at Yale. One can only hope that at some point, they take on the task of renovating the main hall as well. It is possible to retain the integrity of the original style, while improving the experience for all concerned.

Incidentally, the Newberry Memorial Organ, considered one of the finest Symphonic organs in the world, is the main focal point as you look at the stage.  It is huge.  I have never heard it played.  I am going to have to fix that this year. 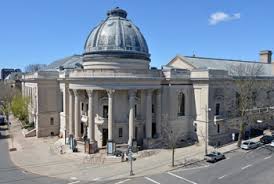